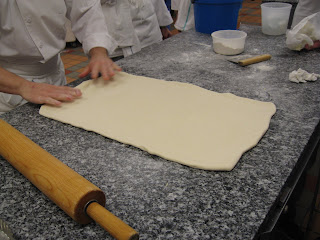 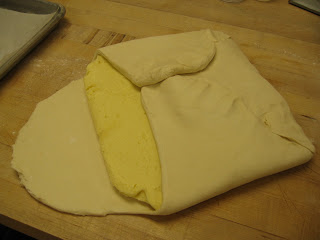 But first, NO SCRAMBLED EGGS!

We did make fruit tarts and assemble our cakes.  Those were almost an after thought as we spent most of our time making, worrying about and generally obsessing over our puff pastry.  About two-thirds through the day I said to one of the other campers "Gee, this really isn't that hard.  Why did I think puff pastry was difficult?"  She looked at me like I was completely insane and walked away.

Today was puff pastry day.  Puff pastry has literally hundreds of layers of butter in the flour.  The butter creates steam as it bakes, and that steam is what makes it rise.  I know you don't care, you all just want desserts.  So I won't bore you with the mechanics of making puff pastry by hand, but it includes such techniques as two-fold, three-fold, four-fold and lock ins.  Sounds like a poker game gone bad, doesn't it? I did a two fold when I was supposed to three fold, so the Chef got involved.  He got me straightened out and my puff pastry was in fine shape all day.  He's learning that I'm not an easy student.  Duh!  My cake assembly skills are right behind my piping skills (I still pipe like a four year old).  I explained that flavor has always been more important to me than appearance.  Chef and the two assistants don't understand that kind of insanity.

We only baked butter cookies today, which were tasty but we have much higher standards now.  After yesterday's dessert extravaganza, my fellow campers and I had to head to the Apple Pie Bakery Cafe for a taste of something, since we would have to wait four hours for dinner before having our second dessert of the day.  Even more strange, none of us thought it at all unusual that we were going in search of sweets.  We did find the most decadent chocolate cookie ever, and I have the recipe in my textbook!  Brace yourselves...it makes 11 dozen cookies.

Then I went to the library and watched videos produced by the school.  They are part of students' class assignments.  The library was also disappointingly lacking desserts.  The videos were good and really were like watching demos in class.  Since I've missed a lot of demos, I was able to catch up on some techniques. 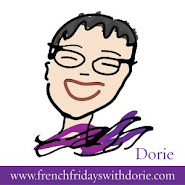 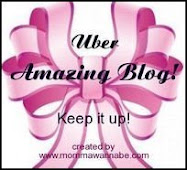